I had some serious pot cleaning to do today, so I set Reagan up on a towel in the kitchen with an activity that she LOVES…playing with rice! I provide Reagan with various ‘tools’, such as spoons, forks, measuring cups, bowls, pots, pans and muffin tins. The cream colored circle thingy in the picture came with the Baby Bullet- it was used to freeze pureed foods. I don’t give her all of the ‘tools’ at once, by adding things as she plays, it allows for longer play time.

We have been doing this activity for several months now. When I first introduced rice play, a fantastic sensory activity to Reagan; I would sit on the floor with her and guide her in how to use the ‘tools’ that I provided her with. I began with only two bowls and a spoon until Reagan got the hang of scooping the rice from one bowl to the next. As Reagan masters the ‘tools’ that are provided, I add more ‘tools’ for her to explore with; showing her first a couple of ways to use them, before allowing her to explore independently. It’s amazing how her fine motor skills have progressed and she is able to use a table spoon to scoop rice from a bowl into 12 individual muffin tin spots.

The first several times that I did this activity with Reagan, we used Uncle Ben’s White Rice, because that’s what I had in the house. While cleaning out the cupboards one day I found an unopened bag of Lunderg’s Brown Basmati, which I believe Erin, my sister, gave to me to ground to feed to Reagan when she was just beginning to eat solids. Anyway, I continue to use Lunderg’s Brown Basmati because I find that it is smoother than the Uncle Ben’s White Rice but it’s totally a personal preference. FYI- we have been using the same bag of rice for 3 months now.

I will warn you that this activity is a bit of a mess until your child begins to figure out the ‘tools’ that they are given. At the beginning stages, I turned the messy cleanup into something fun for Reagan. She loves using the mini vacuum, so after she finished play, I would pick up the towel and the ‘tools’ and let her vacuums up all of the rice! At this stage, Reagan rarely gets any rice off of the towel, so the vacuum doesn’t even need to come out! An easy way to get the rice off of the towel is to lift the sides of the towel and allow the rice to roll to the middle. It’s so much easier to clean up the rice from one neat pile. 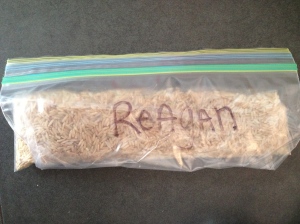 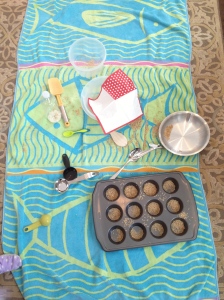 Use what you have and have fun with it!