Blueberries are absolutely perfect here this time of year, so what better way to enjoy them then to pick them ourselves! S & G Orchards is beautiful and has the friendliest staff! The weather couldn’t have been better and all three kids were a dream! 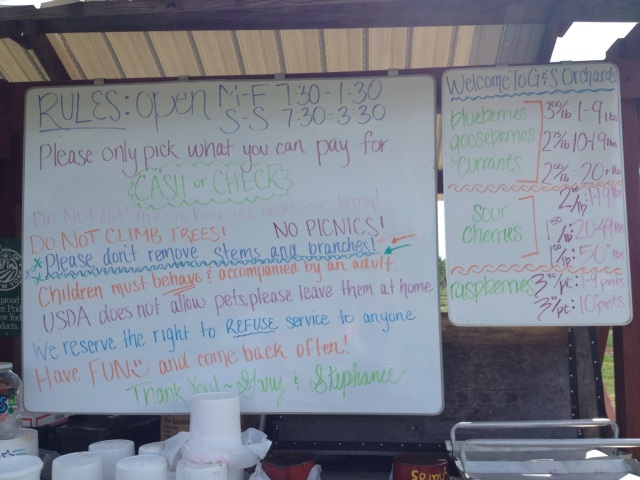 Henry was determined to pick enough blueberries to make a blueberry cake, while Reagan seemed more concerned with the amount of blueberries that she could consume. Whatever made them happy, worked for us! 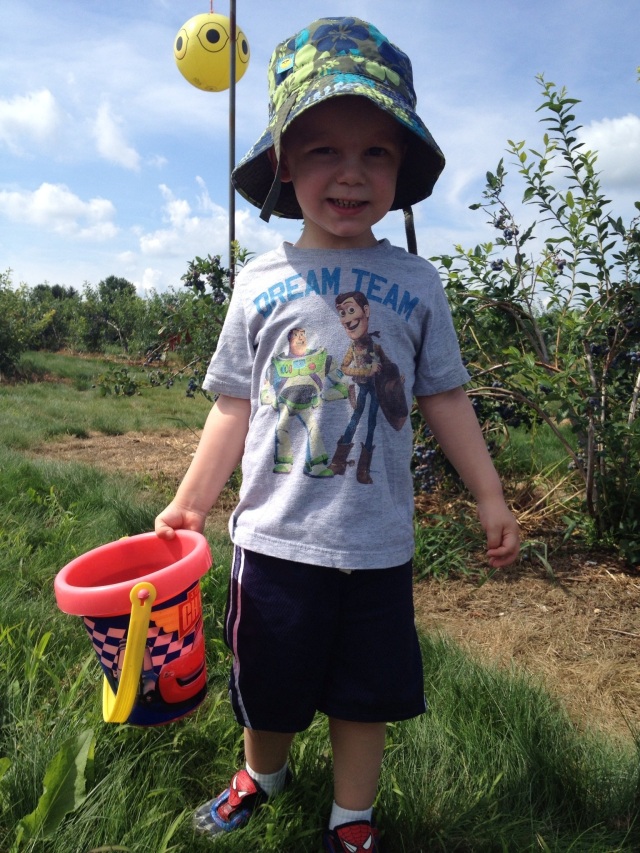 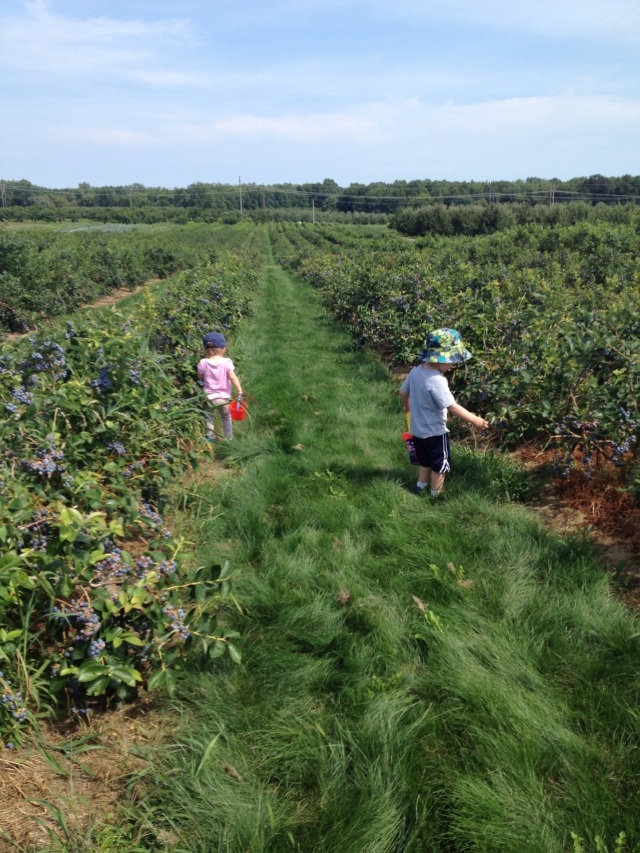 Then there’s this trooper, who hung out the entire time with no complaints- rock on Holden!!

With a $20 bill lost and then immediately found, a 21 month old telling us that she was walking home (a solid 20 miles), and a few delicious gooseberries to top off our gigantic blueberry pile- I have to say, that we had one pretty fantastic morning! 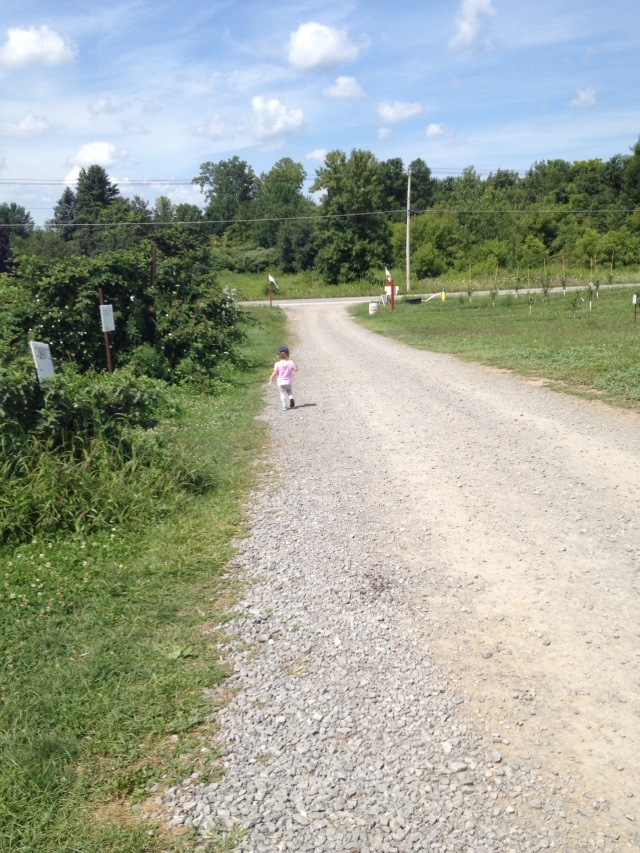 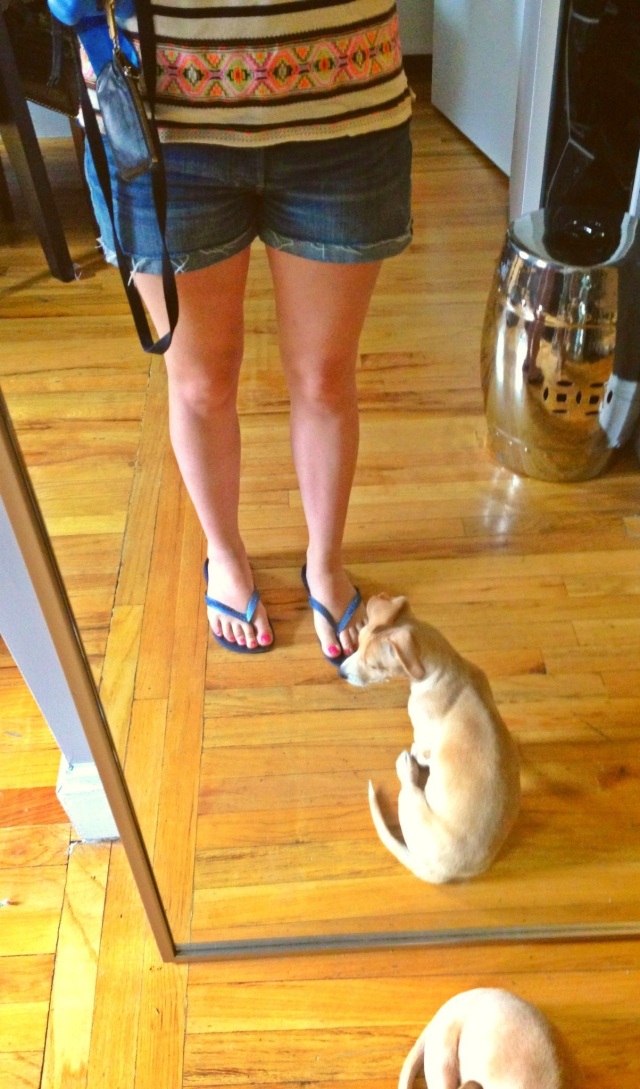 Being a teacher, I have a great deal of time in the summer to spend with Hudson. We take lots of walks, sometimes more than ten a day. I decided to attach keys and a wallet with treats and a credit card to his leash because I am able to run errands on some of our walks. I have several unworn maxi dresses in my closet because Hudson isn’t really a fan or in reality too much of a fan. He thinks it’s fun to try bite the dresses as we walk so I typically end up in jean cut offs or other shorts and flip flops.

…lays down anywhere on the street

…sniffs everything in sight

…plays tug of war with the leash

…attempts to get into his favorite bar, Beer Culture (our favorite too!)

…sits and refuses to move…while still being extremely cute! 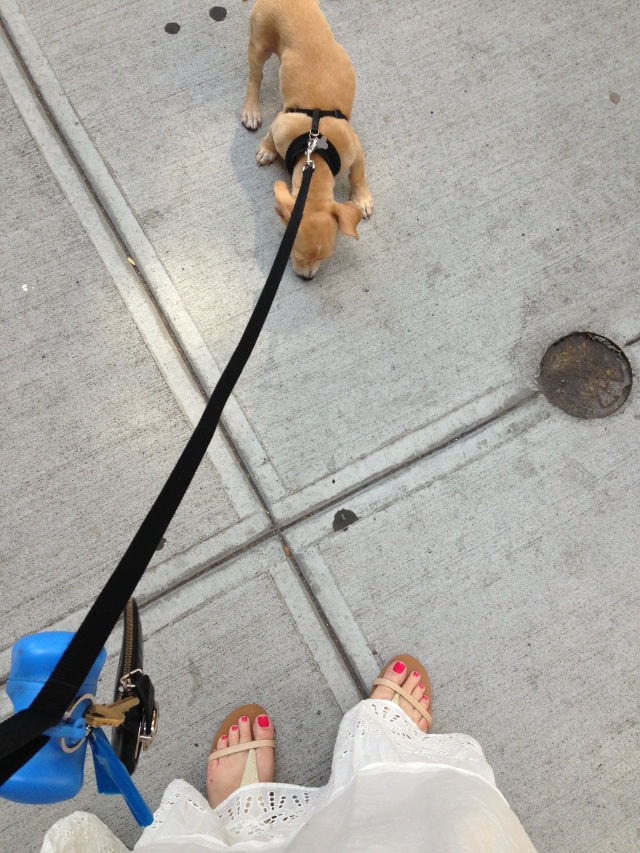 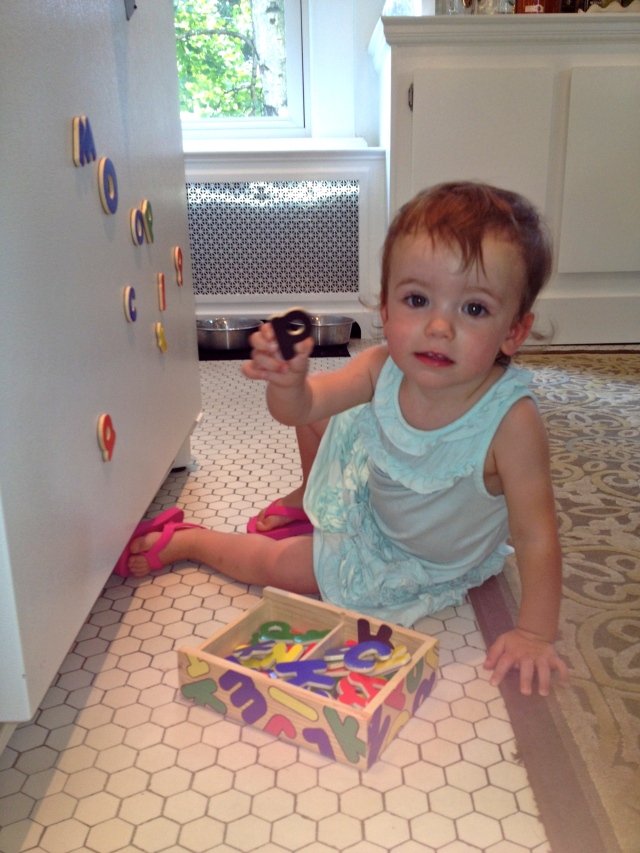 Upgrade! We purchased new magnetic fridge letters today and I couldn’t be happier! Fridge magnets keep Reagan busy for a very small portion of dinner prep time, which is better than no time! We previously sported the plastic magnetic letters on our fridge, I think that they are probably a staple in most homes, seeing how they can be purchased at the Dollar Store or in the dollar section at Target. These magnets always made me a bit nervous with their tiny circular magnetic backing. However, I still allowed them on my fridge…probably not the best idea. Whenever Reagan sat down at the fridge to play with the magnets, I would tell her that we needed to buy new ones, but of course I was usually making dinner, so the idea never sat with me for very long. It wasn’t until Reagan started to remove the magnets from the fridge, put them into her purse (an old Vera Bradley of mine that she has fallen in love with) , and carry them around the house and into the car with her that I knew it was definitely time to get rid of them. This activity, of traveling around with the magnets, threw up huge DANGER signs for me. I was afraid that with her out of sight, one of those little magnets was sure to find it’s way into her mouth. Which in all actuality, could happen just as easily with me in the same room…such a stupid mom moment. Into the garbage the plastic letters went!

On a recent trip to Marshall’s I was so glad to find these awesome Melissa and Doug Alphabet Magnets. They were an immediate hit with Reagan before they even came out of the box! The magnet backing (seen in first picture) is the exact same size as the letter and the letters are large enough that they aren’t going to be swallowed by my little one! The colors are bright and stick to the fridge magnificently! Three letter words are easily spelt with the 52 letters included in the box set. Mixing the upper and lower case letters allows for longer words that use two of the same letters, ReagAn, to be spelt.

All in all I’m super happy with the purchase and at a great Marshall’s price of $7.99! You can find the letter’s here and here as well as various other places.

We headed to a casual engagement party tonight to celebrate a fabulous couple that will undoubtly live a fabulously amazing life together!

I love a soft purple on Reagan, the color really brings out the subtle gorgeous hits of grey that hide within her eyes.  The precisous bow around the collar, adds the perfect touch to this already super cute tank.  And the button down back…LOVE!

Thank goodness for adjustable waistbands! Reagan’s tiny waist fit like a glove in these jeans…after the waist bands were buttoned as tight as they could go.  With a longer top, the bunched waist is perfectly hidden.

She loves her converse!  They were her shoe choice for the night…who could argue with that?

I’ve seen this recipe on Pinterest a number of times and knew that Big H would love it! I try to make most of his snacks as healthy as possible but this is certainly an exception. At least it has yogurt in it haha. The original recipe called for an entire box of cake mix so I scaled it way back so we would just have a few servings. As soon as I got the box of cake mix out of the cupboard Big H started singing ‘Happy Birthday’ because he thought we were going to make cupcakes. Thankfully he wasn’t disappointed with the alternative 😃.

Place first three ingredients in a small bowl and mix. Big H loves to stir everything and anything these days so he was more than willing to help.

Dip animal crackers or pretzels in dip and enjoy!! With a three year old it didn’t take long for this to turn into a messy game of farm animals! 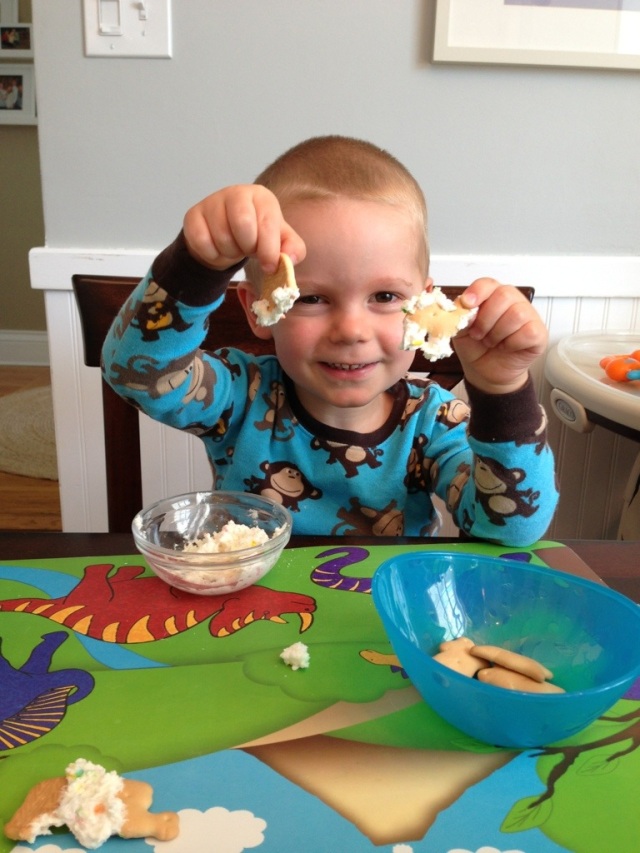